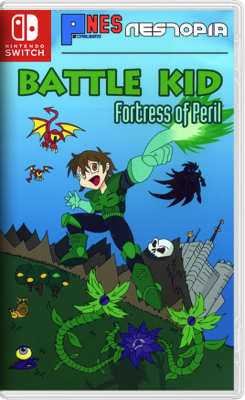 Dr. Tina Byers, a scientist working for the Disch Corporation, receives word that a group of creatures of unknown origin are taking over the base and building the Supermech, a kind of robot with numerous weapons systems in the Il-Akab fortress, where the wizard race once lived. Fearing that this Super Mech may become a threat, Dr. Byers informs you, the protagonist, Timmy of this and gives a prototype for a combat suit. In this suit, Timmy travels there in his spaceship to stop production of the Super Gear.

The release is based on the homebrew pnes-4.4_switch , port emulator open the NES Nestopia from Cpasjuste , as well as two original homebrew games by Sivak Games is . In addition to these games, you can also play any other NES / homebrew game by placing the ROM with it in the / pnes / roms / folder . The menu is called by simultaneously pressing “+” and “-“.
How to install: