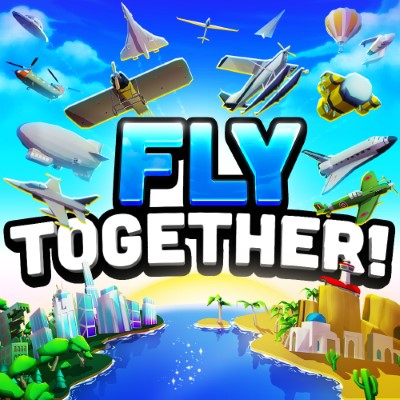 Fly TOGETHER! is a multiplayer game of explosive airplane action that will challenge your inner air traffic controller.

The sequel to the award winning Conduct TOGETHER! takes players to the skies in a race against time to bring passengers safely to their destination by drawing flight paths and avoiding collisions in increasingly challenging action-puzzles.

Fly Solo or hand a Joy-Con™ to your friends and co-pilot through an expansive campaign. Complete contracts, upgrade your airport and collect a growing fleet of airplanes.

Fly against your friends in hectic up-to-8-player battles: throw meteors, invoke tornadoes or drop a giant cake on your opponents. The pilot who gets the most passengers safely to their destination wins.

Here’s some rad things in this game

• Pilot planes in a beautiful 3D world with handheld, stick and motion controls.
• Simple and intuitive gameplay for everyone
• Seamlessly shift between single and multiplayer. Play as the solo pilot or pass the Joy-Con™ to friends for up to 8 players
• Transport passengers, earn coins and unlock new airplanes
• Progress through exotic islands with unique themes
• Fantastic soundtrack by composer Mikkel Gemzøe
• From the Award winning team that brought you Conduct TOGETHER!