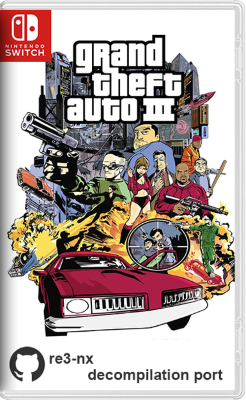 The release is based on the homebrew RE3-nx for Switch from AGraber , decompiled port of the original game RE3 with open source . All WAV audio files have been converted to PCM to fix game issues, and it can take up to 20 seconds to exit the application with an error – this is normal.

Unzip the gta3.7z archive to the microSD root (unpacked ~ 2.83 GB and 400+ files).
Copy the gta3 folder from the Homebrew folder of the distribution to the microSD root with the replacement of files.
Install the Grand Theft Auto III NSP file re3-nx_0516DBB748970000 in any convenient way
Play.