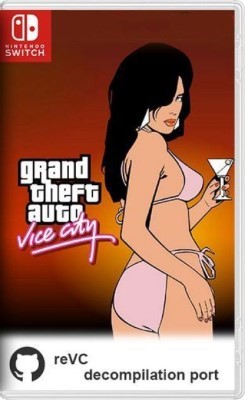 Grand Theft Auto: Vice City (short for GTA: Vice City or GTA: VC) is a video game developed by the British studio Rockstar North, the fourth and second three-dimensional game in the Grand Theft Auto series. The events of Grand Theft Auto: Vice City take place in the fictional American city of Vice City, which was inspired by Miami, in 1986 – the visual style of the game, especially clothing, music and transport, reflects this, sometimes with elements of an elegant parody. The protagonist of the game is Tommy Vercetti, a victim of the conspiracy of his crime boss Sonny Forelli.

to install the original English version, unzip the gtavc.7z archive from the English Version data folder to the microSD root.
Copy the gtavc folder from the distribution Homebrew folder to the microSD root and replace the files.
Install the NSP file of Grand Theft Auto Vice City reVC_05BE1C0259DE0000 in any convenient way
Restart your console, play.