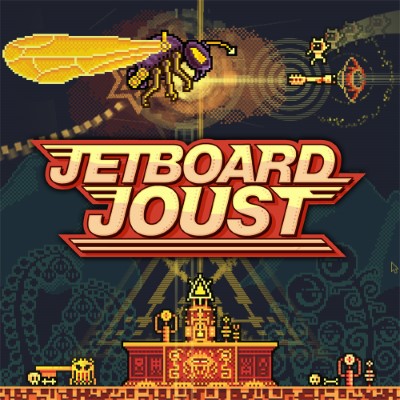 Fast & fluid arcade-style SHMUP meets hardcore roguelike! Take flight on a pimped-up jetboard and face off against massive, multi-stage bosses. A classic for the next generation!

An intense, arcade-style, ‘bullet hell’ SHMUP/STG in which you must master a vast array of ridiculous weaponry in order to defeat a race of evil aliens who are intent on abducting innocent civilians and turning them into mutants. Jetboard Joust blends the spirit and intensity of 1980s arcade coin-op SMHUPs with the replayability and tactical elements of hardcore modern roguelikes. Don’t expect a story. Do expect frantic, fluid, fast-paced 60fps action, big guns, and explosions!

The Jetboard: Leap from your jetboard like a boss to gain temporary invincibility and smash your enemies to smithereens. Destroy pretty much everything in your path. You rock.

The Enemies: Over fifty different enemies to outwit. Be prepared for them to come at you with all the game’s weapons plus their own special attacks. Watch out for a few tributes to classic arcade games of the past too…

The Weapons: From the conventional to the ridiculous! Jetboard Joust offers over thirty powerful weapons, each with its own distinct advantages and upgrade path, to aid you on your mission and leave a path of total destruction in your wake. Get up close and dish out massive damage with the shotgun, wreak havoc with the cluster bomb, fry enemies to a crisp with the flame tornado or shock them into submission with the lightning bolt. You’ll get a different selection of weapons with each playthrough and you’ll need to master them all!

The Bosses: Defeat huge bosses in a series of grueling multi-stage battles and then steal their attacks for your own use. Rendered in exquisite pixel-art detail, these guys will test your weapon-handling and evasive maneuvering to their limits.

The Planets: Choose your own path through a multitude of battlegrounds across the surface of five different planets. Discover hidden treasure, upgrades and awesome new weapons. Adapt your route based on your playstyle, the weapons you unlock and the treasure you discover. Plunder cash from fallen enemies and use it to pimp up your jetboard, jetsuit and max out your weapons for a formidable arsenal. Are you up to the challenge?