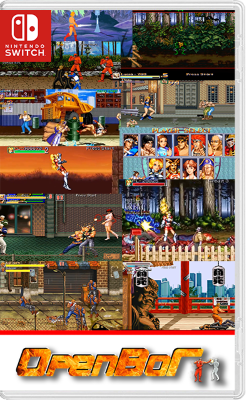 In the distribution is the configured port of the openBOR engine on the Switch, plus a collection of 331 games in the .PAK format for it.

OpenBOR is a modern version of the free open source engine for the Beast of Rage games (also known as Street of Rage / Bare Knuckle) from the Norwegian development company Senile Team. It was released in 2004 (has been under development for 16 years), and is intended to create fan-based 2D-fighting games based on sprites in the style of Beat’em up, the so-called “Fighting on the passage.”

The release is based on the homebrew openbor-switch , a port on the Ver. 3.0, build 4618 from cpasjuste + selected 331 games , from which all demo, nopak, dll-only, nonenglish versions of releases were removed, old versions of games are cleaned, only the latest and current ones are left. One player is supported, the port only works correctly in portable mode, to increase FPS in heavy games, use CPU overclocking to 1785 MHz; Not all games, unfortunately, can work 100% correctly – please let me know about them for exclusion. How to play:

Unzip the openbor folder to the root of the microSD card (its weight will be ~ 37.5 GB),
Install the NSP-file OpenBOR_0559BA7C2AE20000.nsp in any convenient way (via dbi, goldleaf, tinfoil-usb);
Launch OpenBOR, select the desired game with the crossbar, press A, after the download is complete, you can play. After starting the game, in the in-game Options menu> Video Options, you can set the resolution to 960×720, the volume level and other settings, the quick exit from the game is done with the Home button, the Start button is +.