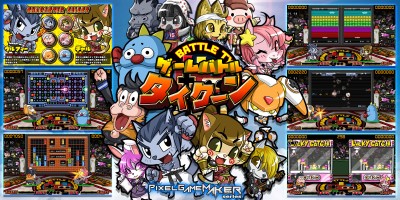 Battle with in-game games! A new kind of game battle!

This is a new kind of battle game that combines a game battle with a fighting game.

The basic rule of the game is to get a higher score than your opponent, but you can enjoy the game without any rules.

You can attack your opponent while he’s playing, or interrupt him by stealing his controller and making a deliberate mistake!

Five types of games are included!

This game is a combination of a block-busting game and a shooting game!

Try to get more positions than your opponent!

Who can get it faster? Play the crane game!

A story mode for one player is included.

A single player story mode with all characters.

Use the special moves and game secrets prepared for each character!

You can store at the store.

Use your winnings to buy items to enhance your character!

Gacha, the collection element, is included!

Use your winnings to purchase items to enhance your character.

A variety of modes are available, including VS mode, CPU battle, and practice.