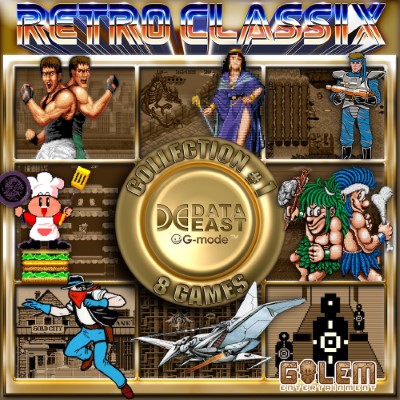 Scratch that retro itch with this super-value pack of 8 classic Data East games. It’s like owning your own video game arcade!

BAD DUDES: The Bad Dudes must pursue the ninjas through the streets of New York City, a moving big rig truck, a large storm sewer and much more, in order to save President Ronnie.
JOE & MAC: Grab your club and get ready to go on a wild, prehistoric adventure with the Cavemen Ninjas – Joe & Mac!
Help Joe and Mac, two cavemen who fight against enemy cavemen and dinosaurs using prehistoric weapons.
HEAVY BARREL: Fight through the enemy’s army and collect pieces for a secret weapon to destroy their underground artillery base.
EXPRESS RAIDERS: Save the Old West, with your rifle and your horse, from thieving Train Robbers.
SUPER REAL DARWIN: The inhabitants of the planet Lakya unwittingly unleash the planet’s life force known as Evol. As the released Evol drifts from planet Lakya, it is received by the inhabitants of the nearby planet Cokyo; the people of Cokyo initiate the Shlohe project, a plan to use their captured Evol to develop advanced biologic ships and weapons to invade planet Lakya. The inhabitants of Lakya retaliate the Cokyo invasion by using their own evolving fighter ships.
GATE OF DOOM: A classic multiplayer action RPG for one to two players. Originally released in 1990, and a noted classic arcade title of the 90’s.
SHOOT OUT: Stop the criminal gangsters and save the civilians in this action-packed shooter.
SUPER BURGERTIME: Play as Peter Pepper Jr. and complete the burgers, but watch out for Mr. Hot Dog, Mr. Egg and the dangerous Mr. Pickle!