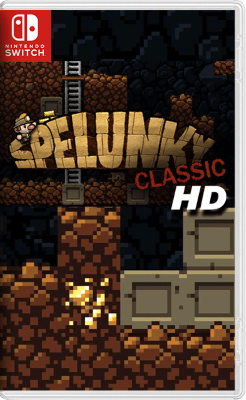 Spelunky (“to spelunk” – explore caves) is a 2D action game with roguelike elements.

You control an adventurer, explore caves, collect treasures, and also save girls who are in trouble. Levels are randomly generated at every restart. The goal of the game is to collect gold, while not allowing his death.
This version of Spelunky Classic HD on Switch is an unofficial port for the remake of Derek Yu and yancharkin from 2017 by Darius Kazemi and YoYo Games with HD graphics based on the GameMaker engine made by Nikita ‘tijesef’ Krapivin.