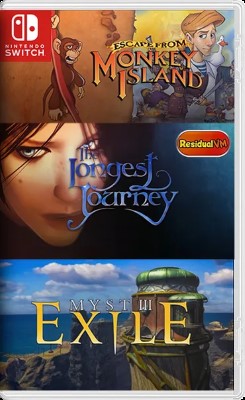 ResidualVM is an open and free reimplementation of the GrimE LucasArts game engine, which allows you to run some 3D adventure games on modern devices.
The distribution contains three original English-language games Myst III Exile (and its version, localized by Russobit-M), The Longest Journey and Escape from Monkey Island, which can now be launched on the Nintendo Switch. There is support for OpenGL or fully software rendering.

The release is based on homebrew residualvm (Switch) v0.4.0git-1 April 12, 2020 from usineur0 ; this is the first version of the port, bugs are possible, the execution speed is good.

The Longest Journey (“Endless Journey”) – in 2209, 18-year-old April Ryan lives in the Newport metropolis, where she fled from home, unable to withstand the strained relationship with her family. Now April, living in a boarding house, is preparing to enter the prestigious art academy. In parallel, she has strange dreams that look very realistic. In dreams, she sees the White Mother dragon from the Drak Kin family, which predicts April the place of the heroine of some very long story ..

Escape from Monkey Island – Guybrush Threepwood returns with his wife Elaine Marley home to Melay Island from their honeymoon, which they left at the end of The Curse of Monkey Island . There they find out that Elaine was declared dead ..

Myst III: Exile (“Myst III: Exile”) – the game takes place ten years after the collapse of the world of Riven. The wanderer (in the role of the player again) arrives at the new home of Atrus and Katerina, located in a bewitching place called Tomana. This is a small oasis surrounded by desert. Atrus invited his friend to show him a new world, written specifically for the surviving representatives of the Dni civilization, a world in which the Dnies could continue a calm and serene life; the world, called Relishan. The portal book of the same name also leads to this world. At that moment, when Atrus is heading to the bookcase, a strangely dressed man suddenly appears from the air, grabs her and hides with him in the world of Jnanin!

Copy the residualvm folder to the microSD root
install ResidualVM_[0595D8A616C60000].nsp in any convenient way
Select a game from the list and click the “Start” button